Tokyo has an extremely well developed network of public transportation, with railway commuter lines, underground (metro / subway) lines, monorails, trams and buses. There are over 60 electric train lines and over 900 train stations in Tokyo.

Fast and punctual trains bring travellers into the Greater Tokyo Area from other parts of Japan, but domestic air travel is also an option.

When it comes to international air travel, Tokyo is served chiefly by the Tokyo Narita Airport and Tokyo International Airport (Haneda Airport).

Rail (both above and below ground) 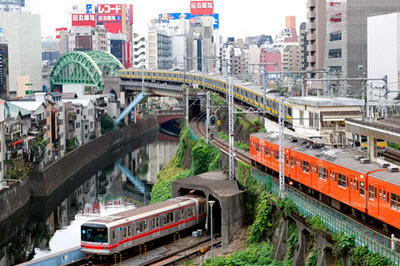 Rails is an extremely important mode of transportation in Tokyo and the Greater Tokyo Area, and the traffic situation would quickly collapse if all commuters started using private car transport instead.

Tokyo has the most extensive urban railway system in the world, with both surface railway and underground (subway / metro) lines.

The underground network is operated by two organizations:

Both the Metropolitan Government and private carriers operate bus routes, with local, regional and national services.

The largest bus stations are adjacent to major railway and underground stations, such as Tokyo Station, Shinagawa station and Shinjuku station.

Long-distance ferries carry passengers and cargo to the islands of Tokyo. 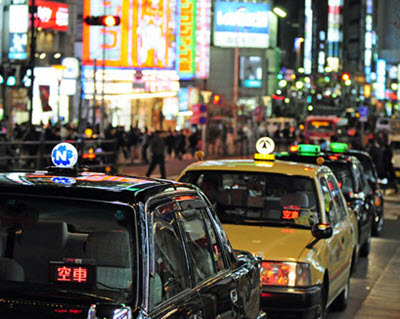 The taxis accept both cash and major credit cards. Some also accept Suica and Pasmo cards.

Most taxis in Tokyo have passenger doors that open and close automatically.

The price consist of a starting fee + a rolling rate per 237 meters. Expressway toll fares are not included in the fare. There is a strict no bargaining policy. A surcharge applies at night (typically from 10 pm to 5 am).

After World War II, Tokyo’s airspace was placed under US military control and Japanese aircrafts were forbidden from entering Tokyo airspace. As a result, the Japanese airports were built outside of Tokyo airspace, such as the Narita International Airport in the Chiba Prefecture.

Located approximately 60 km east of central Tokyo, in the Chiba Prefecture, at the border between the towns Narita and Shibayama.

Several of the islands included in the Tokyo Prefecture have their own airports, such as Hachijojima Airport, Miyakejima Airport, and Oshima Airport.