The busy business core of Tokyo is comprised of three special wards: Chiyoda, Minato and Chūō. Chiyoda is the heart of old Toyko City and contains the Imperial Palace, while Minato is a district that grew up to the south-west of the palace, adjacent to Chiyoda. In the north-eastern corner of Minato is the Shinbashi neighbourhood, which is attached to the core of Shitamachi, the original commercial centre of Edo-Tokyo.

Many large Japanese corporations are headquartered in Minato, and this district is also home to the Japanese headquarters of notable foreign firms such as Goldman Sachs, Apple and Google.

Over 75 countries from various parts of the world have their embassies in Minato.

Examples of well-known business with headquarters or major offices in Minato: 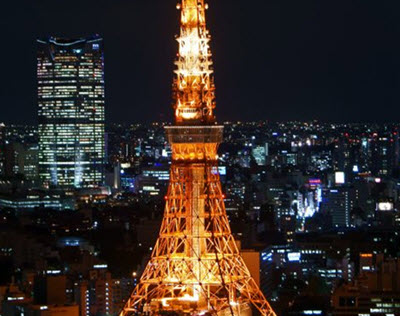 The shrine at Atago Hill

The highest point in Minato is Atago Hill which is 26 meters above sea level.

In 1603 AD, a Shinto shrine was established here by the shogun Tokugawa Ieyasu. Back then, anyone visiting the shrine would have an excellent view of the landscape below. Today, you mostly see the high rise buildings for which central Tokyo is renowned. Before modern Tokyo was built, the hill was used to watch out for fires, and the main good worshipped at this shrine is accordingly a fire god (named Homusubi no Mikoto). The shrine is also dedicated to the water god Mizuhanome no Mikoto, the mountain god Ōyamazumi no Mikoto and the military god Yamato Takeru no Mikoto.

The current shrine building on Atago Hill is not the original 17th century one; a new one was built in 1958.

Very steep stairs lead up to the shrine, and are regarded as a symbol of success in life.

Roppongi, located in Minato, is one of Tokyo’s most well-known nightlife districts and it attracts a very international crowd.

Situated in the north-west part of Minato, Aoyama is one of Tokyo’s wealthiest neighbourhoods, and it is filled with restaurants, shops and entertainment facilities. During the Edo period, it was a district for shrines, temples and the homes of samurai. The district is named after one of these samurai; a man named Aoyama Tadanari who had his mansion here.

Kita-Aoyama (North Aoyama) is the area north of Aoyama-dor (Aoyama Street), and it extends from Akasaka Palace to Aoyama Gakuin University.

South of Aoyama-dor is Minami-Aoyama (South Aoyama), an area that continues to the northern edge of Ropooingi, Azabu and Hiroo.

This cemetery is one of the largest ones in Tokyo, and it is also famous for its cherry blossoms. During the hanami season, visitors flock to enjoy the blooms.

Originally, the land belonged to the Aoyama family of the Goju clan.

One of the most famous graves at the cemetery is that of the faithful dog Hachiko and his two owners Hidesaburō Ueno and Yaeko Sakano. (The dog statue at Shibuya Station depicts Hachiko.)

Aoyama Cemetary includes a special section for foreigners; one of few such arrangements in Tokyo. Many of the people buried here were foreigners who came to Japan during the Meiji government’s push for modernisation towards the end of the 1800s.

The branch in Minato, formally known as The Metropolitan Central Library, is found in the Mnami-Azabu section, and it is free and open to the public. This library also have lending arrangements with over 300 smaller public libraries, and books can be borrowed and returned through this network.

The Metropolitan Central Library houses huge collections of books, periodicals and audio-visual material. As with most libraries, there are certain restricted book collections that you need a special permit to access, and where you have to read the book at the library instead of borrowing it. This is for instance the case with many of the rare old volumes kept here – some of them are over 400 years old. This library is a treasure trove for historians, since it contains over 40,000 documents pertaining to the history of Edo and Tokyo.

Getting to the library in Minato

Directions: The library is located in the Arisugawa-no-miya Memorial Park.